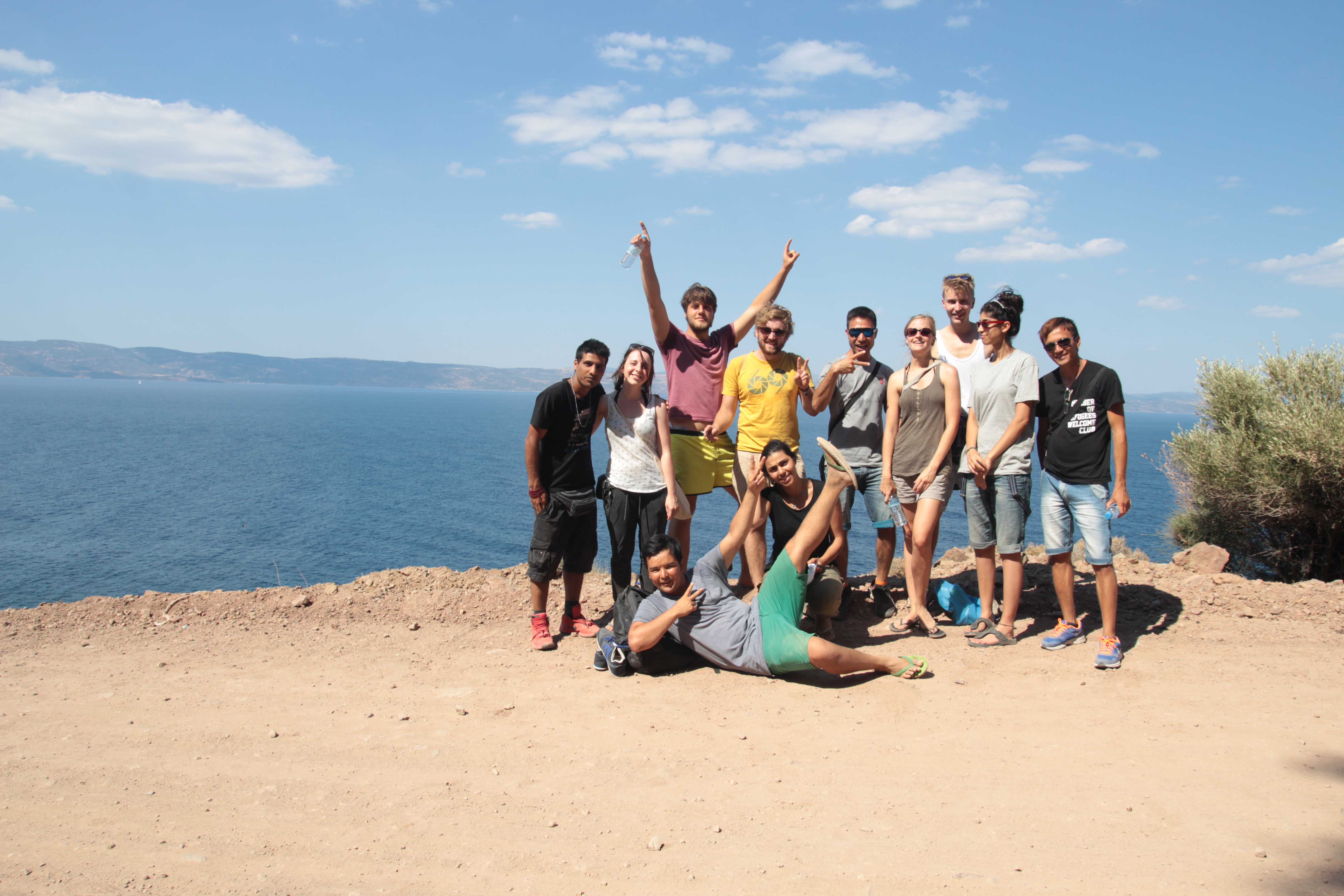 It was a great journey back to the border 2015. And I got a lot of experience and we did so much together.
It was my dream to help those people that they don’t have any support and are leaving their country because of some problem. All of my us supported each other so we could do the best job possible.
We’re strong together and able to climb every high wall or fence.

I heard about solidarity as a word before but fortunately you showed and translated it. In this journey I saw the real solidarity with refugees: everywhere and anytime.
Now I understood what means solidarity .
I am proud of myself that I was able to support the new arrived refugees and be a part of this journey back.

It’s impossible to explain it by words or writing because you all did the best of you
I don’t know what will happen in the future and next year.
I would like to join in this sweet group in the next journey back to the border 2016 but I’m not sure if I can?
Now I left you and sure miss you all so much and your place is here ❤️❤️ forever . Thank you all so much. Special thanks to the Drivers,translators and cooks, that they were really so much busy.
Bye bye . I hope see you all again

It is my first time in Mytilene. My friend Selinia told me to come to be part of the gathering. They have relations to CCR and nothing to do with the government. I was very happy when she asked me to come here as I will make new friends and because I will get to see the island that I have heard is very nice. It was the opportunity to leave Athens, a city that is packed with racism and problems with the police.

When the ferry was on its way to Mytilene I swam with my thoughts. I thought how nice the island will be. But suddenly, when we arrived in Mytilene, the police disturbed us at the exit of the ferry. And all the thoughts that I had disappeared. They controlled us. We are not criminals, the only problem is that we are refugees. There is a law here in Mytilene that refugees are being kept until they can prove that they are free to go. Here the rule that one is innocent until proven guilty never exists. In this country it is normal to treat refugees badly because there are no controls of those who do bad things to refugees. These forms of racist behavior against us are similar to those that we have experienced in our country, they only wear different clothes now!

END_OF_DOCUMENT_TOKEN_TO_BE_REPLACED

Hello,
I am an Afghan girl who lives in Hamburg, Germany for 2 years. I am 18 years old, I go to school, and am in the 11th grade. Right now I am in Mytilini, the capital city of Lesvos to particpate in the conference of the initiatives Youth Without Borders and Infomobile to help the refugees who arrive in Europe. When I was in Germany and I knew I would come to Mytilini I was very excited and happy. I thought to myself: “everything is good, and everything will work out well for the refugees.” But unfortunately it was not as I thought to myself!

All of the refugees where very sick and they were homeless. Everyone was tired and they had no drive. Some people slept on the street, some in the harbour. Nobody is able to sleep. Everbody is stressed out. Some lost their families during the journey or even through death. While some were physically present, their minds and souls were somewhere else. If I have to summarise my thoughts I would say that everyone was alive but their souls were already dead.

For hours, days and nights, they were on the streets or at the harbour so that the police could come to arrest them. The people were disoriented and just waiting for the police to arrest them. But the police did not want to arrest them. Nobody wanted to offer them food or something to drink. Nobody tried to understand them. Me and the others felt helpless because we could not do more than provide food, drinks and clothes, organise demonstrations or get in touch with the media. Nonetheless, thank god that we are at least able to do that and show our solidarity with them. They are not alone, there are people who think about them. We invited all of the young people who live at the Villa Azadi to a party and we brought them into our group to show that they are not alone. Also there were young people who were just released from the Moria centre who we invited as well. We prepared food for them and gave them clothes that they could wear. They opened up to us and told us stories about their fate and the sorrow in their hearts. All of them were very intelligent and multifaceted and two of them performed for us and sang beautiful songs. Below we post the link to the song they sang.

END_OF_DOCUMENT_TOKEN_TO_BE_REPLACED

Hello Friends,
today, on the 10th of October 2013 we had an appointment with the mayor of Mytilene, Greece. The goal of this meeting was to negotiate the closing of the prison of Moria. We wanted to thank the city of Mytilini which helped us to set up the camp in Tsamakia beach of Mytilini for a short time. We also invited the mayor and his staff to join us for our welcome party which will take place tonight.

Because the mayor is a nice and friendly person he accepted our invitation.
He told us that he agrees with us about closing Moria. He does not like the prison of Moria. He told us that he could open Pikpa.
Pikpa could be an open and welcoming place for the refugees arriving in Mytilene.
Pikpa could be a better alternative to Moria. Pikpa is a symbol for freedom and hospitality while the prison of Moria symbolises imprisonment and unfreedom.
In the end the mayor wished us well for our project and journey!

On a journey back to the border, we track back our traces to Europe.
Letter to the people in Mytilene

Dear people in Mitilini and on Lesvos island,

We came via Lesvos and/ or Greece to Europe, most of us some years ago and we are living now in different cities in Germany and Sweden. We finally got a right to stay and arrived. And we want to start a journey back to the border to track back our own traces to Europe.

A lot of us have made our first steps on European soil on your island. And many of us have been in Pagani, this very bad place on your island that is now history – after a long and hard struggle from inside and outside. We have made a lot of bitter experiences in Greece – but we have also met you and others who had been in solidarity with our struggle.

Also today refugees arrive on Lesvos, among them unaccompanied minor refugees, like us. They are like we have been, without help and support. As we said already we have made a lot of bitter experiences: we have survived the dangerous trip on the small boats, we have seen prisons and violence by the police. We have experienced homelessness and push-backs and racist attacks also on our further journey and with the fingerprints the border followed us until our countries of destination.

But we have also seen you and many others who helped us, sometimes with seemingly very small things like giving us a pair of shoes or food or just a friendly welcome. Many of us came to the island in a time when a lot of things were different than usual: during Noborder 2009 we stayed in the circus tent in the harbour of Mitlini directly after our arrival. In the very first moment we found friends from all over Europe. Others have spent some time in Agiassos, among us also known as the “Villa Azadi”, the villa of freedom. We come to meet you again and to thank all those on the island, who set their welcoming against the cruel borderregime. You gave us the hope that was necessary to reach our right to stay. For many of us this has been a starting point of a common struggle for the vision of another, a welcoming Europe, that maybe exists in the future.
END_OF_DOCUMENT_TOKEN_TO_BE_REPLACED

we made posters of the lines of the poem, and stuck them up on streets of Budapest (some of them are translated into Hungarian)

I don't know witch way I should choose? Should I choose the wright or the wrong? I don't know. I would like to follow a star. But there is no star I could follow.