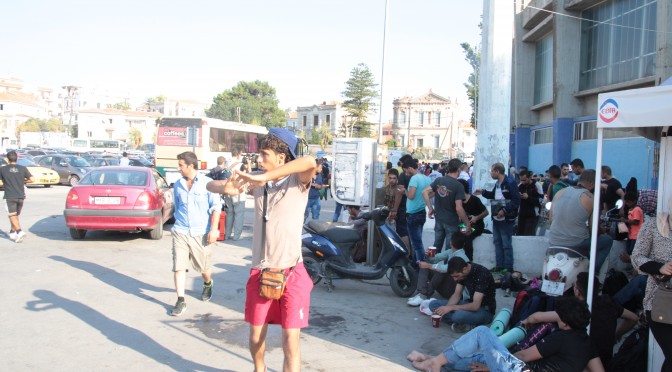 Just before I went on my trip to Mytilene I saw in Germany the news about refugees in Greece. On TV it was reported on how aggressive and angry the refugees were in Greece (Mytilene). After I saw these news in Germany about the refugees I started to think and worry a bit. Would it all go alright? Would it be right to travel to Mytilene and help the people who require support? Would I endanger myself or not? These questions formed in my mind. I travelled nonetheless as I had already booked my ticket and had promised the group that I would come and participate.

When our ship dropped the anchor in the harbour of Mytilene, I saw from above used rubber vessels and many people (men, women, and children) who did not look well and who had to wait in the heat for their registration. When we went to our camping site (Charamida), somewhere far away from the harbour and the city, we saw families and men, who were lying on the street as they could not walk anymore and were tired. We stopped and gave them water and information. We then quickly went to our camp and unloaded our car. When the cars were empty we drove back to bring the refugees to the harbour to register.

To all those who do not understand the anger of the refugees: inform yourselves, talk to the people who had to flee and do not be afraid to seek contact. Our index finger should point to the politicians and no to their victims.