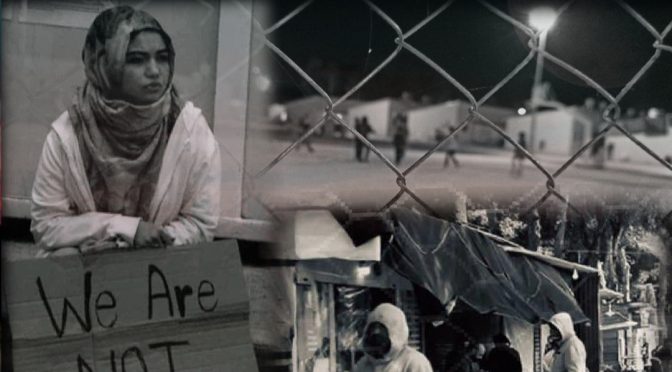 I am Parwana Amiri and at this moment where I’ m writing to you.
I’ m sitting back against the wall located in the middle of nowhere, between factories that produce different gases that cause various breathing problems to children and elder people.
Here is Ritsona, the refugee camp, where responsibility is absent, vulnerable s are ignored.
We are those refugee individuals and groups that could be moved away from the Aegean islands to the mainland, due to being highly vulnerable, but what we are faced with despite our vulnerability is being at the bottom of the care list, even now, during the pandemic.
Having the fundamentals is an unquestionable right for those, who are in quarantine, yet we, the people locked down in Ritsona are far from that!

However, we should have the chance to get sufficient and proper meals, not just baskets of dry food, where the most necessary things are missing (flour, diary products, meat, vegetables, fruits, bread, eggs, powder milk for babies in some ages…).
We had the chance to buy our necessaries from the shops, that are inside of the camp before, but now as we don´t have access to ATM machine we can´t buy or we may borrow the money from our friends and be lucky if they could save from previous month.

As a vulnerable population, we need to be attended by a medical department and to not be totally left to our own fate, like it happened in the last days, where neither any doctor nor even any nurse has been present in the camp.

As we suffer every day, I want to write down all of our problems the way they are:

I feel that I must ask you the following questions:

Enough is enough!
by Parwana Amiri

This site uses Akismet to reduce spam. Learn how your comment data is processed.