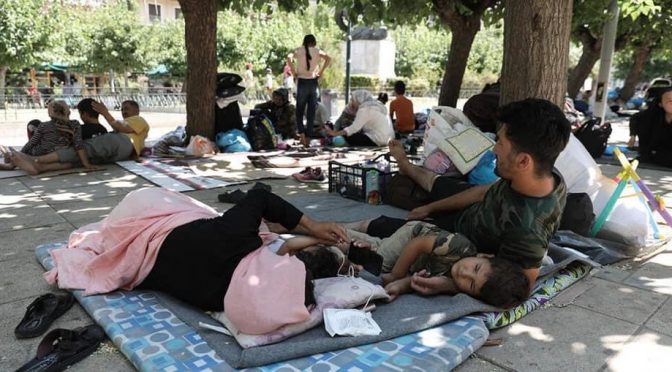 We come from far away lands – lands of war, violence, misery. Our lives were threatened every day, every hour, every minute. So we plucked our courage and we left in search of a better, a secure and safe future — for ourselves and our children. We traveled in fear, facing all sorts of difficulties, all sorts of dangers and threats. Finally, we reached Europe.

We have been in the refugee camp of Moria, on the island of Lesvos, for months and months. It felt like a prison, it felt like hell. Nobody cared for us. And whenever some people tried to help, they met hostility and persecution from the authorities.

After many months spent in that hell, lining in queues for food, water, medical care, to use the toilets or the showers; after many months surviving in squalor, with sewage water running along our tents, garbage piling up; suffering the cold, the rains, the heat with no adequate protection against the elements; after many months of humiliation, repression, uncertainty and fear of the violence that broke among the people cramped up in that prison, we managed, on our own, to leave that hell and arrive in Athens. Did we make the wrong decision?

Here we are now: in Victoria square, in the capital of Greece! We pass our nights in the open, suffering cold during the night and heat during the day. Our children, hungry, play with naked feet. To use a toilet, we can only go to the restaurants around, but the owners are often unwilling to give us permission to use them. All our possessions are stuffed in a suitcase. We use our few clothes as pillows under our heads and we share some blankets with each other during the night. While the rest of the world is sleeping we are awake, because danger threatens us each moment here, in Victoria square. Smugglers approach us, asking for money and promising a safe passage to other European countries. How can we trust them? Dispossessed, displaced, alone, we are at the mercy of strangers.

The shade of trees is our only protection, but they do not protect us from the eyes of the passersby. Look at us! What you see is the reality of our life, not a theater drama or a dramatic film. Don’t bow your head to avoid our sight and pretend that you don’t know what is happening to us. Don’t avoid us as if we were carriers of disease, or criminals threatening your life. And don’t pretend you support us by taking our pictures and posting them in your facebook. Our children are not actors performing in the films you shoot without asking us. They have their own dreams they long to reach. Will they be allowed to?

Is it a crime to say ‘no’ to injustice?

Is it a crime to demand our basic human rights?

Is it a crime to struggle for a better life?

Is it a crime to demand the satisfaction of our basic needs?

Is it a crime to challenge what you call “democracy”?