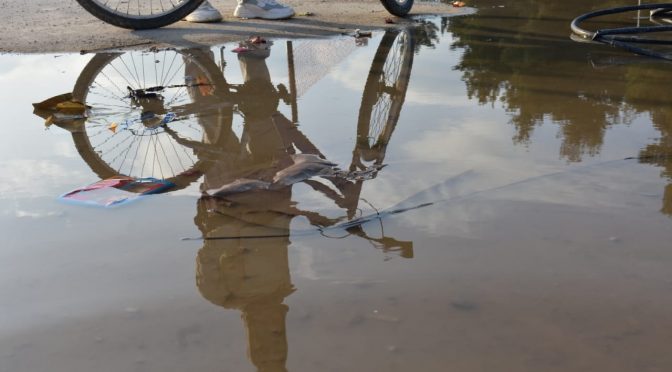 A refugee is someone who, once, had a normal life, a home for his  family, a school for his children, a hospital. He enjoyed respect and dignity. He had friends, relatives and basic humans rights. He had dreams, hopes, plans for the future. What he did not have was safety. That was taken from him by political and economic games.

A refugee is that brave father and that courageous mother, who
pluck their courage to protect their family and choose to leave their
country and undertake a voyage with death lurking along the way.

A refugee is a person, who amid the bombs, the explosions, the
fires, he does not give up his hopes for a new life for himself and
his children, for safety, for peace, for nights with dreams rather
than nightmares. A refugee dreams of a day when the news do not
report numbers of killed or injured, do not recount bloody suicide
attacks.

A refugee is a human being who is as normal as thousands of
other human beings who constitute the population of this world.
The difference between him and those others is the place where
his luck decided he would be born.

A refugee is a mother who gives birth to children whose lives she
will not enjoy. She does not rejoice at their birth. A pregnant
refugee woman can listen to the heartbeat of her baby inside her,
but she cannot hear her child’s laughing or crying in the crowded,
noisy and chaotic world of refugee life.

A refugee is that powerful, courageous and freedom seeking
member of a family, who cannot accept that his rights and freedom
are repressed.
A refugee is an orphan child, a single mother, old parents,
vulnerable people, victims of wars who gathered all their courage
in a back pack and who, holding their children’s hands, passed
thousands of miles of distance, walked over mountains, often losing their way, tolerated hunger and thirst, crossed borders, faced all sorts of difficulties, including humiliations and indecencies
by border guards who treated them as criminals. The women,
among them, faced the worst physical violence, being raped not
only during the voyage, but even in the camps where they found
themselves enclosed. Those women did not face violence from
strangers alone. Even more tragic, they faced the violence from
their fathers, brothers and husbands, violence unleashed, in them,
by the horrible conditions of their lives.

Yet, in spite of all these hardships, a refugee is the one who did
not resigned, but held in the back of his mind the promise of light
that for millions of refugees was the light called Europe.
Thus a refugee is someone who after many failed attempts, after a
number of pushbacks, even deportations, insists on reaching that
promised light, that Europe.

And what does any and every refugee find reaching that promised
land of Europe? Certainly not a new life! What awaits him are
discrimination, inequality, repression, segregation as if prisoners,
exclusion and deprivation of the most basic human rights — all
these in a climate of total uncertainty about their future.
A refugee is a single woman, an unaccompanied girl who is put in
the so called “safe zones “ where life is threaten by those very
people who live inside such a zone. A refugee is single mother
living in a tent near a tent of men who drink alcohol and lose
control over their actions.

A refugee is a girl like me, who is writing every night what she
experiences everyday. Every night, before she falls asleep she
proclaims her dreams in the hope that she will reach them one day. She is fighting against injustice, like many who are fighting
against repression.