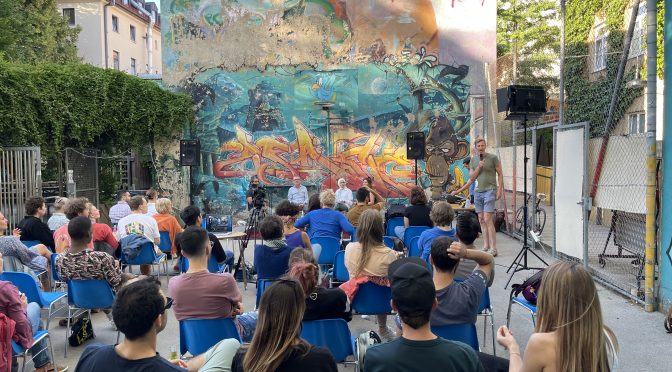 Would like to talk about the importance of having different voices in a panel discussion.

It was Saturday evening and I tied my booth eyes to the participants of the program, Luisa a friend of made me worries telling ” maybe there will not be much people participating, everyone may stay on the seaside and enjoy the weather.”

“I imagine to have as much participants, as we may need to put more chairs, so that people won’t on their feet.”

The place of the program was in the centre of Munich, “Bellevue di Monaco” where the pride of protesters passed by, an highlightable point in the protest was, that the number of police and militarisation was more than protesters. The protest was again “militarisation of Germany.” A voice to stop selling and producing weapons. A movement supported by environmental activists as well.

When I entered to the cafe place, I noticed that different people were working, an Asian man, with a Congolese boy and many more. I was already amazed to know about their strategy in communicating and running the place in such an organised way.

The panel started with akademic bold point of great author “Volker M. Heins.” and continued with my poems and texts. But I would say the most important part was to have voice of Arash, his story of being resilient and resistant against all odds.

When we were talking about the borders, the main focus of the participants was to know, what is the solution of this border mechanism. Though we have talked about it in the panel as well, but I would like to say ” you are the solution.” Your perspective and reaction in the time of crisis.

The second issue was about, big media companies and a new pathway of getting informed and updated about what is all going on the world without getting manipulated by mass media.

“You are in the right place right now, and need to increase your participation  in such discussion.”

Yes, you are not to be all in the same rhythm of words or voice in a common discussion and even having opposed perspective about a common conversation doesn’t mean being two polar. This is what Arash always considered, he thinks that he is not a good speaker, but whatever comes from depth of the heart is precious to be listened.

We talked about importance of following all other crises beside what we newly get to know about through media, or get effected in our daily life. Because all of them are connected to the other. This brings me back to what was going on the camps of Greece, when there was something critical happening in the centre of Athens, in Victoria square, those who were left behind walls and barbed wires was forgotten and the same was about struggle of those in the camps. It should not be normal, but what can be the most effected way to stop this circle?